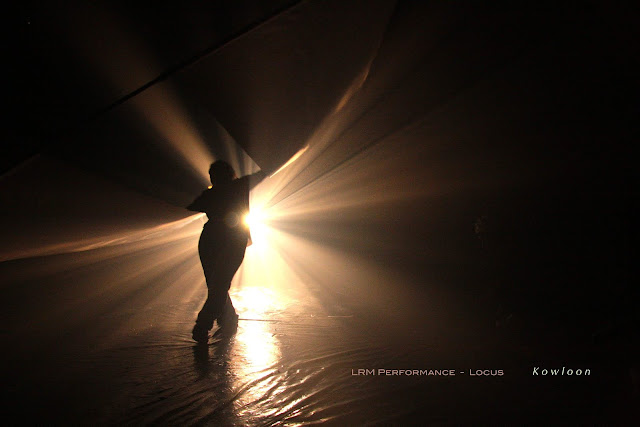 Historian and researcher  Idoia Hormaza has been to  a general rehearsal of Kowloon, these are her impressions, from her blog  The Cockpit hub :

""In Kowloon nothing is what it seems.
In Kowloon you never know what may happen.

From pitch darkness, from absolute silence, a few points of flashing green light suddenly emerge flashing at the bottom. Almost immediately after a low sound reverberates with increasing intensity, a horn from a temple or a warning sound of war? If the sound was isolated a more vague reading may be construed, but it comes with a whitish light that reveals a colossal figure advancing ceremoniously with a disturbing outfit. With some extensions that open like arms, like the artful plumage of a peacock. With both hands it firmly holds and occasionally gee up two people crawling on the ground with difficulty
Slow, tortuous, incessant.

Something happens, they revolt, the monster falls but in its horizontality gets metamorphosed into another being, remaining helpless and frozen. At that moment the roles are reversed and those who up until then were passive, armed by the opportunity, empty it out in a rapture of force pulling from its guts threads of white power.

This scene starts Kowloon. Alienating and rich in suggestions it appeared to me either as coming from the beginning of a parallel civilization or a post-apocalyptic future. Or in my memory Kowloon begins with this scene.

After that the three characters –are they really three or are them just three actors playing more? How do I know? They move in a strange place, they might be seeking, they may be working into whatever their strange ordinariness is. Everything is ambiguous, or rather in their serene movement acts, suddenly convulsive, everything could be happening.

Music and light are one, that is the material their world is made of. Its dimensions extend far beyond the physical and real space, that gets really forgotten, in spite of the ground and the physical laws. Projections of shadows that either are in the imagination of those creating entities or are for real, are presented as mobile warps echoing the rhythm of incomprehensible voices.

These entities live as if everything was mechanical, as if there was no reflection. Seemingly they cannot see, so immersed as they are into their activity. But perhaps that's the feeling of the uninitiated who does not understand their rites, their searches; Perhaps it is actually a simple plan by which they mimetically and wisely relate to the environment. Or simply it all happens in times so apart from ours that there is no grasp for reasoning and for that matter, every opportunity for dreaming is present, is simultaneous. For the one who does not understand, it actually remains as a phantom reality.

Kowloon is not one, it is a many. How many ingredients from parallel worlds! ... An open tale of science fiction that allows multiple readings, which allows multiple no-readings. They are open oceans where you swim among stimuli rather than waves.

Kowloon is cinema, is theater, is music, is light, is action, comics, is photography ... it comes as an electric current to shock, it comes as a soothing balm.
And that is precisely the best of it, it's a cool respite invading and transporting you ... It does not matter nor is it necessary to know precisely where or when because just therein lies its essence,
in the absolute lack of localisation.
Kowloon is pure imagination.
Acoustic and visual beauty."

You may read her full article Here 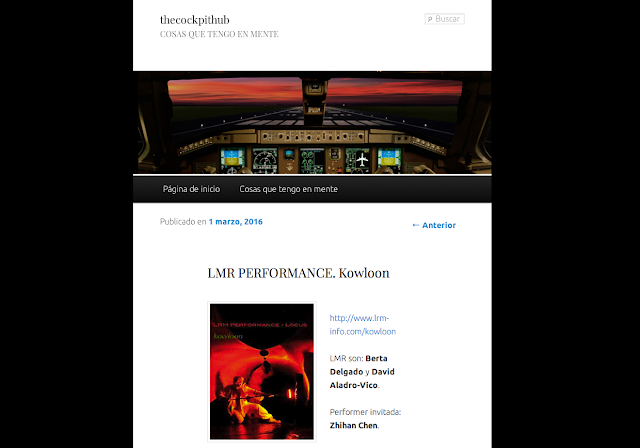