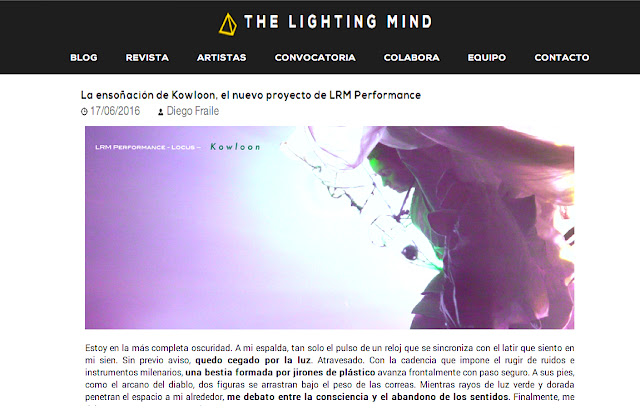 "I'm in complete darkness. Behind me, just the pulse of a clock that is synchronized with the beating I feel in my temples. Without a warning, I was blinded by the light. Pierced. With the cadence imposed by roaring noise and ancient instruments, a beast formed of plastic shreds is advancing frontally with secure steps. At its feet, like the arcana of the devil, two figures crawling under the weight of the straps. While green and golden rays of light penetrate the space around me, I struggle between consciousness and the abandonment of the senses. Finally, I let myself be dragged in. I'm in Kowloon.

Berta Delgado, David Aladro-Vico and Zhihan Chen, also known as LRM Performance (Locus) are flesh and blood. However, when their new project Kowloon comes alive, they dissolve into light and sound, actions and emotions. But, despite what this partnership with the immaterial might suggest, the experience of Kowloon holds a tension between the visceral and the purely mental. David Aladro-Vico told us that with this kind of art they sought to break the pervasive and ubiquitous mediation of screens in life and aesthetics. There certainly is depth in Kowloon. Lighting effects and soundtrack surround you and cause a physiological reaction. There is no interaction with the public and the vision is unique and frontal, but the viewer is organically transported in there. It is a physical and sensory experience. 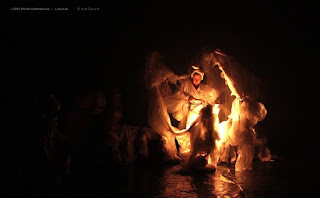 During the development of the piece, I could not help thinking of the realm of dreams. LRM Locus consider narrative an impediment for aesthetic and emotional reception. You cannot make a story of what you are seeing, you can only surrender to the pleasure of the moment and the sublime imagery. As the sleeper awakes and vainly tries to fetch from his memory the dream just parading through his subconsciousness, the Kowloon experience resists being told. Like dreams, it can only be experienced. It is this relationship with the dream which helps to explain the strong sense of distance and at the same time, of participation in the dancing afterglows.

Gaston Bachelard in The Poetics of reverie, tries to capture the wonderful poetic potential of that moment between sleep and consciousness in which neither of the two planes has yet complete power over the other. The moment when, for Bachelard, poetic creation was possible. Kowloon exerts a spell of reverie.

Kowloon comes together in a melting pot of influences from different media, with predominance of asian references, of which its creators speak about without fear. In a time when virtually access to all culture is within the reach of a click, it is absurd to consider yourself a great demiurge. There is much more value in receiving, processing and creation of a new piece through personal baggage. As it always has been said of Picasso, it does not matter how many images he absorbs, but how he digested them. But make no mistake, Kowloon is not a collage of quotations. The iconography –which takes place in scenes combining lights, projections, sounds and actions in the guise of film sequences– constantly amazes and astonishes our eyes and minds.

Retrieving Bachelard once again, he believed the moment of reverie could not be something merely passive, but rather one "asking us to activate our participation in the creative imagination". There is where the magic of the piece lies; each one of us receives and constantly reconstructs it according to his or her own experiences and memories. Where some see the warmth of a post-apocalyptic desert, others see a cemetery of bones or a struggle between good and evil.
The viewer dwells in Kowloon. The creative act not only derives from its creators, but it continues inside those who experience the work. Therefore, Kowloon, which has no narrative, can not be narrated. It must be lived"