Anna Roig (aka AnitaKlimt) is an active and corageous artist and culture advocate
working in audiovisual production and collaborating in different Art and Culture magazines
such as Anormalmag.

She attended Memory Root Light and wanted to ask us some questions
This is her interview with  LRM Locus,  just got out of the oven at Anormalmag 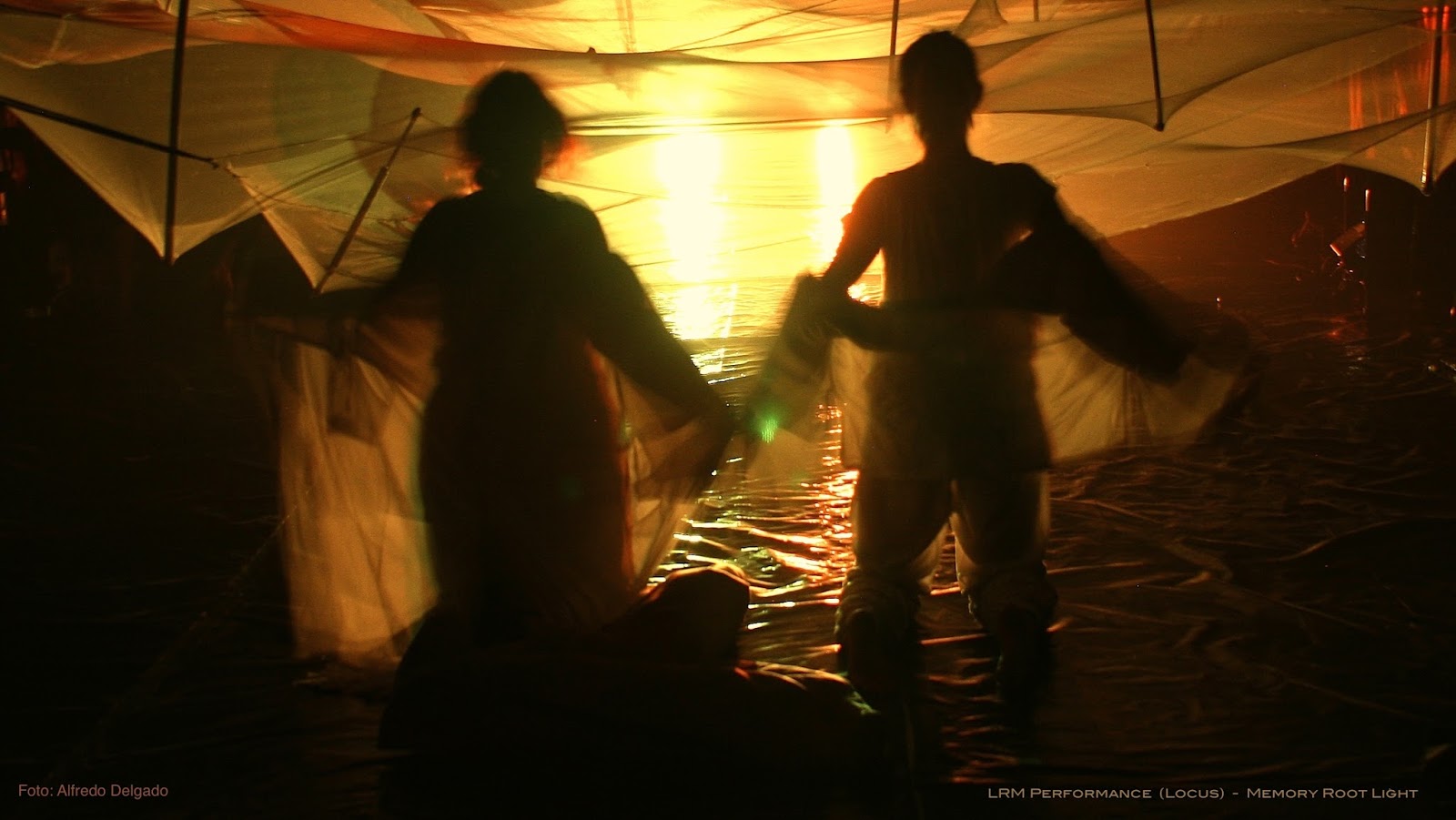 "LRM Locus: What is interesting for us about performance art is its
openness, its abstraction possibilities and its interdisciplinarity"

Berta Delgado and David Aladro-Vico are the perfect tandem behind LRM Performance -Locus, an interdisciplinary collective creating visual, movement and sound works which transport the viewer into a world of sensations where you are free to imagine and create your own story.

Where does LRM Performance come from ?

David : I come from writing contemporary music, and felt the need to do something which includes everything I like in addition to music.

Berta : after finishing Fine Arts I wanted to do something different too, so in 2004 we started making short live digital painting plus prepared piano improvisations, interspersed with video art pieces. From there we went on complicating  it with light, movement, installation, prosthesis...

How did performance art appear in your life ?

Berta : My family has always been so fond of contemporary art and within their friend circles there were artists making ​​performances. My brother and I were taken to all kinds of artistic events : exhibitions, concerts, theater. I was eager of the performing arts and was part of several theater companies while studying Fine Arts. Performance art was interesting me because it combined two worlds in which I was into, contemporary art and performing arts.

David : I remember seeing pictures of Fluxus in my parents' art books  when I was young. Years later,  while I was a student in the '90s it struck me that at a conference of Mauricio Kagel he mentioned " gestural music " and ZAJ. By then most people around here used the term happening, usually in a derogatory tone. Then I discovered many later artists like Laurie Anderson or Dumb Type came from there.

Do you believe performance art is an underrated discipline, or is it gradually taking place alongside more established arts such as painting, music, cinema... ?

David : People ask us a lot if it is accepted among other forms of art, but for us it is very clear that  it is accepted, you may find it in all major art centers, theaters or auditoriums  –not in vain 50 years have past since Fluxus and ZAJ. But it is only that particular performance style of the '60s that is accepted .

Berta : For us it is a way forward, not a style, as some artists and critics  pretend (sometimes without even being aware of it ).

What is "Memory Root Light" ? When did the project come about?

David : Memory Root Light is a continuum of abstract scenes seeking to generate unpredictable emotions in the viewer –the title and its meaning is not important, in fact it is a simple anagram. The project originally was an installation to be realised in residence at the Contemporary Art Center in Aomori, Japan, in 2010.

Berta : We decided to go with it, expanding and developing the work, from late 2011 and throughout 2012, with more light designs, video, materials, movement, instruments and sound.

How to prepare for your performance? What will you inspire ?

David : Our working ways are not conceptual, we are not interested in using a concept, nor a story or idea, nor an image or predefined starting point. Where do things come from? simply by living we all accumulate and collect experiences all the time, which we then use, but we are not interested in becoming too much aware of them nor using them to conceptually explain  the work.

Berta : We work quite regularly (in fact, sometimes we have to force ourselves to take days off ) and the material accumulates waiting, you never know when or how it will be used. The assembly process can be lengthy.

In your performance you employ light, music, sound, dance, movement, your own bodies become strange figures... with such mixture of feelings, what do you wish the viewer to perceive during the hour your performance lasts?

David : Just what you say, sentiences... when we prepare the work we make a huge effort for the outcome to have nothing conceptual or narrative. We do not want to tell a story or display a concept. We do not want to "express" something preconceived, we want to generate an emotion, but it is for each individual to have his or her own. Efforts should be made for the work  to be not narrative nor conceptual because sometimes it comes out without being aware of it.

Berta : We work this way because our objective is to allow viewers to elaborate their own interpretation, concept or narrative, if they find it. And although it does not condition us, we love to hear it. It's amazing what the audience is able to interpret, it is always quite different.

Do you believe there is more creative freedom in performance art than  in other artistic disciplines ?

David : What interests us about it is its openness, its possibility of abstraction and interdisciplinarity.  Too bad for those who want to monopolize the word but performance is used in all temporal arts. For us it is a way to escape the inbreeding the arts are suffering which keeps them entrenched.

Berta : Yes, they tried to impose a specific '60s model of performance art  and expel those who do not follow it.  We endeavour diversity.

Do you have plans to bring your performance elsewhere ?

David : Of course, in fact Memory Root Light was first presented in Italy into the Miniere Sonore electroacoustic music festival. Our website is mostly in English  which we use as a lingua franca.

Berta : The reception of this kind of works outside Spain is much better, they are more open. Also, you know, nobody is a prophet in his own land.

What are your projects for the future?

David : We are now into the new piece, working title is Kowloon. We have many things in the pipeline to try out and build : kinds of light, types of sounds and instruments, costumes, prosthetics, shapes and movements.

Berta : It will take time, but we have a lot of patience...