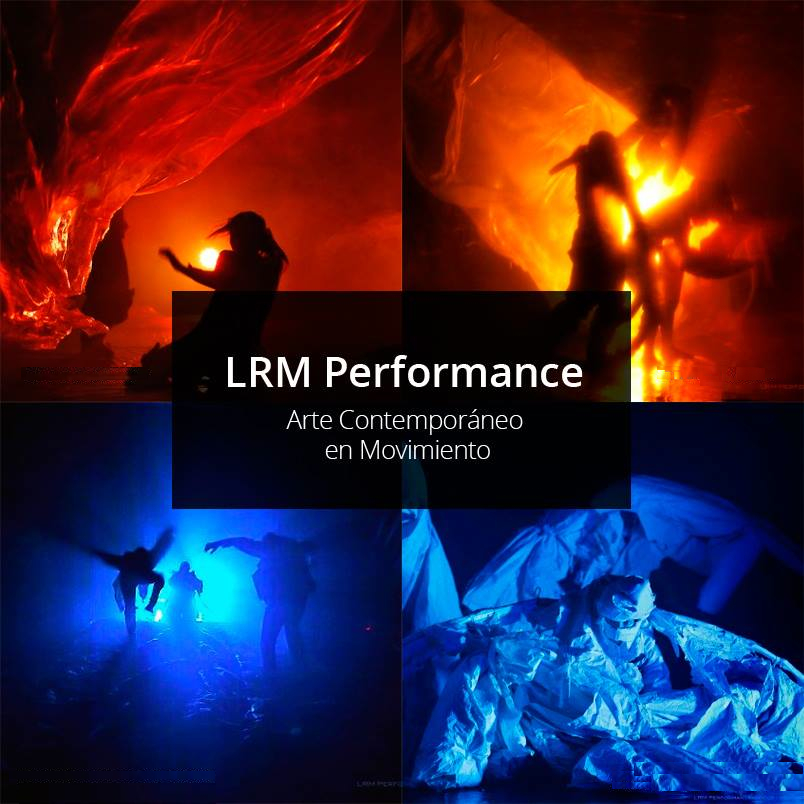 Ruth García: LRM Locus results from simultaneously combining different arts (music, movement, visual and performing arts ...)  it is breaking from the traditional, the mixture of different artistic disciplines in favor of something new and especially of something quite personal. In short it is precisely the merger of two professional profiles coming from music and plastic arts.

How were the beginnings of this ambitious project?

Berta: Our beginnings were simple, we did sound and visual improvisations; we realized both arts mutually reinforce. From there we decided to use and mix many more elements, from all kinds of backgrounds, because we enjoy so many different things. This forced us to a greater complexity, but in the end the ambition is the same as the start, just creating work as we ourselves would like to see it.

After watching your live staging, there is something different about this type of art…  could you disclose any secrets to us?

David: Doing something different is very difficult, and knowing the secret of why, even more, but that's what the job is about, and possibly there lies its value, in that it is not easy to explain why.
Berta: Maybe it's different because we transform elements without  letting their origin condition us, or because we do not  want to become "militant" in any particular art form or style.

Your body is an instrument of action, to paraphrase Henry Bergson ... You are the essential ingredients in this creative dish, each with a particular role.
Could you tell us a little more about  each one's role in Memory Root Light?

David: We seek to escape from the narrative and conceptual, so we strive for the public not to be able to perceive a "role" or assign a meaning or function to each one. In that sense we get closer to what Bergson described as duration, as opposed to some erroneously mechanistic understanding which explains everything as action-reaction of elements (characters or concepts) that takes away the viewer's freedom to create their own vision or sense . To eliminate the "characters" and their "roles" is one of our greatest challenges. We keep working on it.

Berta: In performance art thereis is much ado on the importance of the body, I guess that's a veiled reference to Viennese Actionism. Many current performers claim they prioritize body and do not care about light, sound, objects or their environment in general.
Giving importance to the body only suggests a narcissistic rhetoric to us. It looks easy, almost commercial, and already tired. We've also seen it in dance and theater.
We –in contrast to it – regard everything as equally important. The body and its actions are as important as the environment and all its elements.
Because for the audience it also is.

A unique experience ... LRM Performance is not a written story, each staging is unique, as is determined by many factors including material ones, in fact the sound of these, in some sense determine the flow of each action, set the pace of the work's motion itself.
This is precisely what makes the project alive.
How do you feel in each staging? Are you worried in any extent about the outcome?

David: Yes, sound makes perceptible the relationship between time and space. In fact, sound is more effective for perceiving motion than light (i.e, attempting to synchronize with light instead of sound is much more difficult). We use a time line —that is, a score– , something that is at the origin of performance art, as for example in Cage and Cunningham or later in Esther Ferrer, -but few performers have it in mind today.

Berta: Of course we do worry about the result, that's why we have the computer timeline controlling light, video and sound, and guiding our movement. There are some moments for improvisation, but we do control them, for not anything that comes up is useful to us. But what feelings arouse in those who see it, that we cannot control, so as in all creation, there is always a risk. If it were not so, it wouldn't be worth it.

However, despite the absence of a script, we have seen that behind every project is a very thorough job, every element that is part of the action is perfectly designed, it all makes sense, nothing is random. In this sense, is it complicated to marry the pieces?

Berta: Sure it is, it takes much longer to create, test, investigate. There are artists concerned with one thing only, whether visual, movement or sound, and the rest, either they leave it for someone else or they do not care.  That we think is a sign of sybaritic attitude, laziness or apathy in some cases. As I said before, addressing several fronts means you have to work harder.

Following this, something that draws the attention of those who have had the pleasure to visit you in your Open Studio, is precisely getting to know step by step the creative process of this project, the research behind the sounds, materials and activities with which you form new realities.

A Priori unconnected elements you nevertheless conform a puzzle with, where everything fits perfectly and this is precisely what the viewer sees.
One cannot imagine that behind this surprising staging there is a mostly "manual" toil.
But perhaps the most complex issue for you may be to determine the different contexts in which to place the performative action.
What do you think about this?

David: That's right, we want to create a "context" – although an emotional or sensitive one rather than textual– but not to place into it an action; we may start from either an action or a light, from objects or sound, start either from one or from several at once. For us, everything is connected. There is no hierarchy, all are equally important.

Berta: Yes, the labour is "manual", because the elements have to be manufactured or assembled, there's no choice if we want to be original. This applies to all objects, movements and sounds.

We sometimes use any readymade object, after transforming it. We enjoy explaining things to our guests, but we are not interested in the public paying attention to the object's anecdote, that trend in recent years' plastic arts of using or serializing found or removed from context , we have already seen that too often.

Something very interesting is the stories behind each item chosen. How to combine different stories within one story is the amazing result you have achieved with Memory Root Light.

Berta: as David suggested before, we create the work of art preventing the viewers from perceiving a thread or setting roles, nor give them a story or a concept or previous topic. It is very important to us that they do not have a closed mind about the work conditioning them and for them to have freedom to interpret their way. We want to escape from the conceptual way of understanding art,  for it seems easy and boring to us.

David: It seems more respectful and much more satisfying to hear how people interpret what they saw, without handling them it already done. It's amazing what each person may interpret;  the more different each viewer's interpretation is, the more we feel that we are on the right track.

If you had to reel off your staging, what item / object would you pick out?

Berta: I don't know, we are too well acquainted with them all to choose one ... But an object without its sound and movement, it wouldn't work. In our studio we observed how the perception of materials and objects changes dramatically depending on sound and light.

And Anecdotally, could you tell us the story of any item / object from your project? We know there are so many ...

Any new projects in the short term?

Berta: We have been working in our next work for some time now, it's provisionally titled Kowloon. But from what we said before, we cannot work in a very short term. We have to create the objects, light, movement, composing music ... many people are not aware that  composing just a few minutes of music  can take you a month.

David: You can get lucky, but generally if you want to make a careful work you need time, nothing worthwhile is achieved quickly. What we do is we work every day accumulate, then review and rearrange to give its final overall shape. We already have enough material, I think it may be ready for 2015  ...

Thank you to Locus' team for opening the doors of their studio to Plastiké Art Gallery and offer us live a unique and unforgettable experience.

Thanks Berta and David for sharing your art!
Thanks to you, it's been a pleasure.