"… A disturbing, magical, overwhelming staging, where the harmony of the parts becomes tangible in the eyes of the beholder through the movements, stillness and silences of its players, plus an impeccable technical apparatus, which acts as a catalyst for the most primary pulsations of the human being"

This is the English translation of the review of Kowloon by Silvia Santillana published at Va de Arte:

Silvia Santillana is an Art Historian specialized on critique and cultural communication. She is editor at El Cultural (El Mundo newspaper) and at the digital plattform QAH Patrimonio. 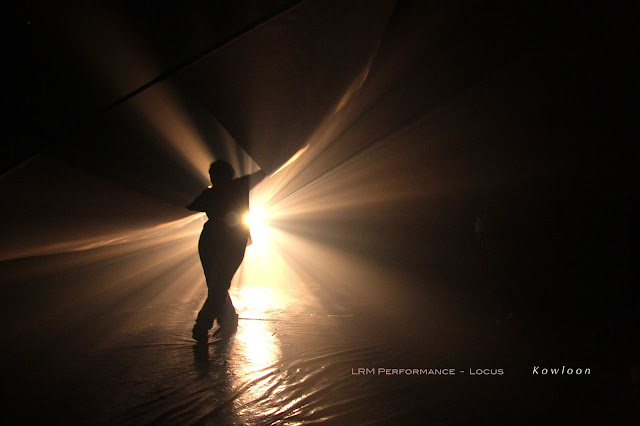 When the lights go out, darkness overwhelms us, our senses sharpen up. An indescribable feeling surrounds us. A powerful impression lurks in the shadows. We do not know where we are or where we are going. Suddenly, a light constricts our pupils projecting us into an intense, imponderable glow wrappping up an illusory space full of lights and sounds. It's Kowloon (2015), the latest work from the LRM Performance (Locus) collective.

Kowloon is everything and nothing at the same time. A disturbing, magical, overwhelming staging in which the harmony of the parts becomes tangible in the eyes of the beholder through movements, stillness and silences of its players, plus an impeccable technical apparatus which acts as a catalyst for the most primary pulsations of the human being. There is something in Kowloon of a primeval state, of a chrysalis or an amphibian, a transitory state towards another something fleeing the anecdotal and connected to multiple underlying ideas. That idea, those traces of physical and eidetic experiences like frames of a movie or prefigured memories create a lattice, a hive of invertebrate creatures and indefinable shapes, escaping all logic and any categorization. 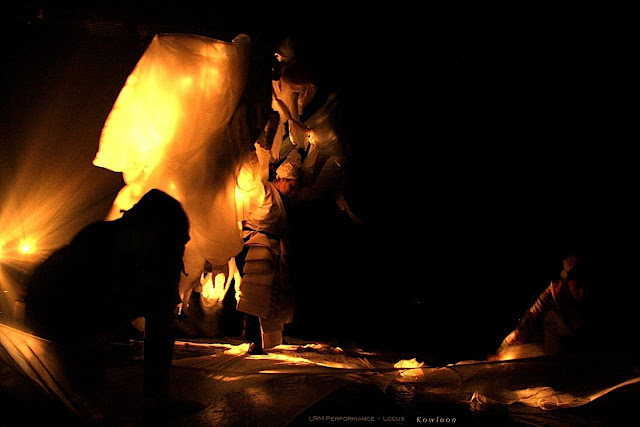 In Kowloon the idea of ​​the occult, of assembling images and materials compounds the essence of the creative process of this group formed by the performers David Aladro-Vico, composer, and Berta Delgado, visual artist, along with the guest movement performer for this piece, Chen Zhihan. A multidisciplinary work that shuns the traditional and present performance art trend of minimalist space and naked body.  Here, space is a labyrinth, an illusion, where the three performers may get lost, metamorphose, turn into hundreds, into one, or into none. A space that creates new perceptions with screens and mechanisms, revealing a pristine truth through its disguise,  one we can only access through art.

The idea of an ​​indefinable organism, which is cellular and mechanical at the same time is also present in this suffocating space inside the studio and in the beholder's mind; an immersive experience of 56 minutes and 22 scenes, which alludes to the Walled city of Kowloon (Hong Kong), demolished in 1994.

This fort created in the seventeenth century eventually became a Chinese enclave within British territory. Its structure began to grow after World War II, becomng a maze of buildings, one above the other, densely populated, a tangle of conducts, cables and pipes; a jumble of forms where sunlight barely penetrated. This phenomenon was documented in books and films, whose images remain in the memory through various cultural events such as Hong Kong cinema.

But above all, it is the spiritual atmosphere of Kowloon, through artificial lights and sounds, taken and altered from nature itself, which impresses us and puts us in touch with some eastern thought, not only from Hong Kong, but from different sources and locations. Thus Paprika anime film creator Satoshi Kon or master Lao Tse's basics of Taoist philosophy  seem to be present in Kowloon; a performance  disregarding no popular, current or traditional characteristics of Asian culture.

In that mélange of refined, frantic movements, endless lights and sounds, one also seems to contemplate the beginning of civilization itself, being part of the time when Prometheus stole fire from the gods to deliver his gift to mortals. With this action, the protagonist was punished to remain chained in an eternal torment and regeneration cycle which we cannot ignore in this LRM Locus' chaotic and mystical experience, making it clear their influences come not just from the Kowloon peninsula or Asia, but  from human beings and their emotions. 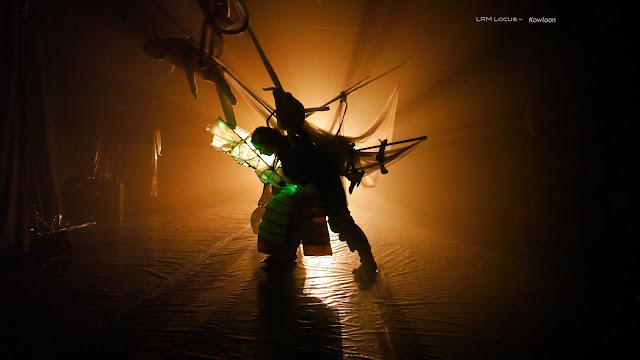 "Our work seeks unmediated emotions, therefore expressly avoids narration by including the widest possible set of influences, carefully assembled to generate emotions instead of a thread or concept."

Thus, the "Anarchitecture" Gordon Matta-Clark or northern Finland's Onkalo nuclear repository  are just some of the images that make up the universe of Kowloon. In a mix of chance or fate, LRM Performance (Locus) studio is in Usera, the neighborhood with the highest number of chinese settlers from the Canton province in Madrid, along with many  other expatriates from around the world.

Traveling between the physical boundaries of the current political map we realize everything is possible within the human mind; Kowloon is proof of that. Any interpretation is free, and all creative work aims at giving wings to the imagination of the viewer; something LRM Performance -Locus not only achieved but exceeded, by referring us to a pure and chaotic state through the immersive experience of their toiled and wonderful work. " 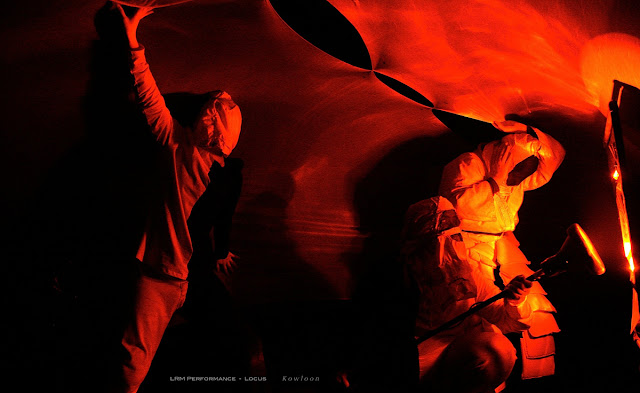