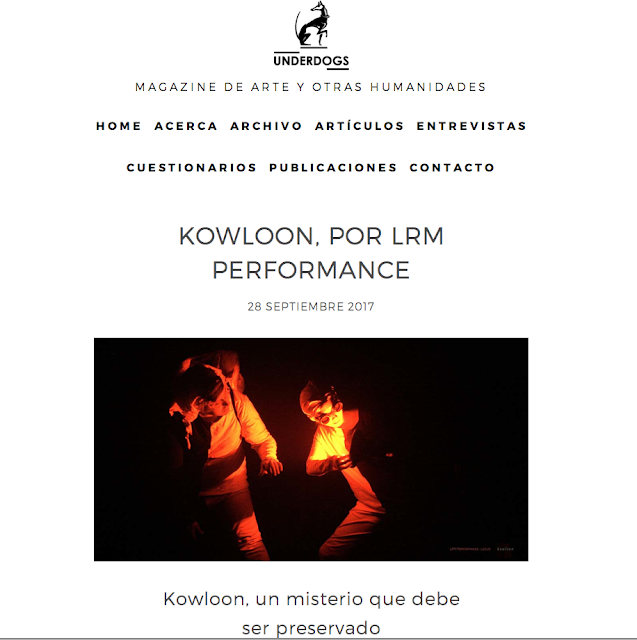 Is editor and scriptwriter of art, culture and tourism videos with a degree in Art History and Audiovisual Communication from the Complutense university working as a journalist, cultural manager and community manager since 2004; worked with the  Spanish Ministry of Culture, 2 de Mayo Cultural Centre, National Museum of Romanticism, and Lázaro Galdiano Foundation. He is author of the poetry  book  “Clima artificial de primavera” (La Bella Varsovia, 2012) and he texts for the game-book “Inspiración Instantánea” (Modernito Books, 2013).

This text is his critique of our work, Kowloon, originally published in spanish in The Underdogs Magazine

KOWLOON, A MYSTERY TO BE PRESERVED

Under the title of Kowloon, the name of a peninsula that is part of Hong Kong and in which its Walled City was overcrowded with chinese exiles for decades, LRM Performance present their latest work: a piece heir to the best avant-garde theater with expressionist lighting and absence of dialogues.

Contrary to what is usually said about non-narrative proposals such as LRM Performance's, Kowloon uses rhythm and tempo with unheard-of exquisiteness, among other reasons because it relies on a solid formal structure –key to the success of any show and the very essence of beauty.

Although it may seem that another order is possible, the different scenes follow each other forming a homogeneous and harmonious whole, unalterable and closed as a universe that has no raison d'etre other than its contemplation. Way to go! 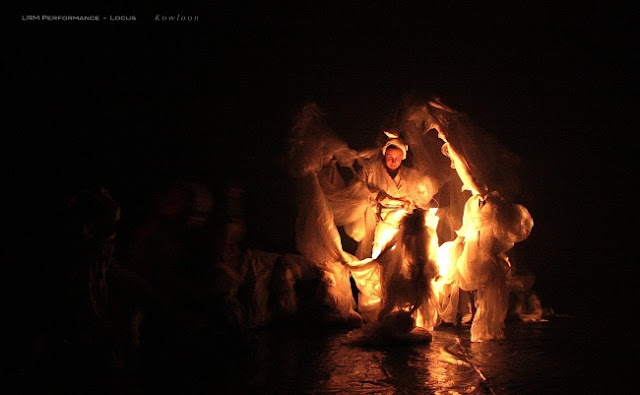 The sound environment, built up of volumes and weights belonging to architecture –areas of light and shade like those evoking the now-destroyed Walled City of Kowloon– generate an atmosphere from which mysterious characters emerge, ranging from the sinister to the tender or from disgusting to the sublime.

It could be said that we are in front of a moving landscape, with its changes in scale and intensity:  the smallest point of the horizon that grows as we approach to it until it becomes a huge cathedral behind which rosette lies nevertheless just a close-up of our own viscera.
I believe many directors and playwrights, even those who practice other kinds of theater –or rather those who do– could handle themselves more easily on stage if they followed the same guidelines that govern this piece.

The public should be asked to attend Kowloon as if they were to watch a firework display, a Ballet or a Mendelssohn concert, and ask no questions about what this play does or does not say. Questions that obviously have no answer, because true art creations conceal a mystery that must be preserved.